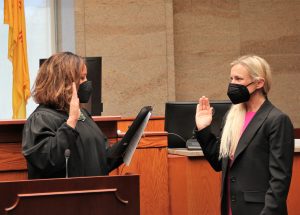 The Honorable Claire A. McDaniel was sworn in as Bernalillo County Metropolitan Court’s newest judge after her recent appointment by Governor Michelle Lujan Grisham. Judge McDaniel was appointed to the court’s Felony Division, where she will primarily hear Felony First Appearances and Preliminary Examination Hearings. She succeeds Judge David A. Murphy, who was appointed to the Second Judicial District Court in July.

A familiar face of the courthouse, Judge McDaniel practiced law in the Metropolitan Court for nearly a decade, serving as an Assistant District Attorney in Bernalillo County. In her role as a prosecutor, Judge McDaniel also served on a number of Specialty Court teams, including the DWI Recovery Court, the Community Veterans Court and the Behavioral Health Court. Judge McDaniel has served on the Board of the New Mexico Association of Drug Court Professionals since 2018. She also previously worked as a prosecutor in Cibola County.

“It’s an honor to join the court that has become like a second home over the years. Public service is dear to my heart, and I look forward to serving the citizens of Bernalillo County in this new capacity,” said Judge McDaniel.

Judge McDaniel is a marathon runner and cyclist, and mother to two boys, four dogs, and one cat.