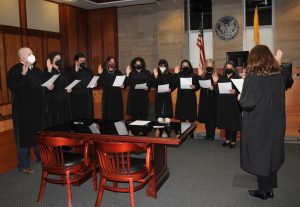 Eleven Metropolitan Court Judges renewed their oaths of office on January 3, 2023 after being retained or securing their seats in partisan races in the November General Election.

Recently appointed Judges Asra I. Elliott, Claire A. McDaniel, Nina Safier and Joshua J. Sánchez won their partisan elections uncontested and will be up for retention in the future.

The Metropolitan Court is a court of limited jurisdiction that handles petty misdemeanor and misdemeanor crimes that carry a maximum jail term of 364 days and fines of up to $1,000. The Civil Division presides over cases in which the amount in dispute does not exceed $10,000, subject to the other jurisdictional limits of the court. The judges at Bernalillo County Metropolitan Court also conduct Felony First Appearances and Preliminary Examination Hearings.